Acting solely in the best interests of global Internet users, the Independent Objector (IO) can lodge objections in cases where no other objection has been filed.

The Independent Objector is limited to filing objections on the following grounds:

The IO cannot object to an application unless there is at least one comment in opposition to the application made in the public sphere.

If you would like to submit a comment on an application, please visit the Application Comments page. Here you will find instructions on how to submit comments, how to view comments already submitted and information about how your comment will be treated.

Updates from the Independent Objector

21 Feb 2013
The Independent Objector has posted new comments on controversial applications. They follow the initial notice procedure established by the Independent Objector. The IO is eager to lead a fair and transparent assessment of each application. After reviewing applications, the IO sent an initial notice to applicants he deemed possible candidates for an objection based on the limited public interest or community objection ground.

Applicants had the opportunity to react to the IO's comments and parties were given the choice to participate in mediation or negotiation processes. Welcomed by most applicants, the Initial notice procedure opened up an opportunity for settling pending issues. In light of applicants' comments and feedback, the IO has reconsidered his first assessment of those controversial applications.

For the sake of transparency, comments posted by the IO aim at informing the public of the results of the IO's second evaluation of an application. As he is acting in the best interests of the public using the Internet, the IO is convinced that the public should know about the subject matter and extent of his exchanges with applicants. The newly posted comments on his website, show that the IO no longer considers his intervention necessary. Therefore, with their permission, applicants' responses are attached to the comments.

The IO engaged a team of lawyers to represent him before the ICC Panels which will be set up to examine the objections.

Some applications may warrant an objection, though, and the IO sent initial notices to specific applicants calling for their reactions to his initial review. However, it is important to note that those comments are still preliminary and do not prejudge the IO's final decision to file an objection against the application or not. Comments can be found on the IO's website, at http://www.independent-objector-newgtlds.org/english-version/the-independent-objector-s-comments-on-controversial-applications/

07 Nov 2012
The Independent Objector reviewed the submitted new gTLD applications as well as related comments posted on the application comments page of the new gTLD microsite. The purpose of this review was to consider whether an objection on the limited public interest and/or community ground was justified.

As an independent decision-maker, the IO will not necessarily file an objection just because there are many comments on a particular application. However, to ensure transparency and address significant public concerns, the IO will, in December, post on his website public opinions on applications which have been extensively commented. For all requests, you can directly contact the IO at Contact@Independent-Objector-newgtlds.org or using his contact form.

About the Independent Objector 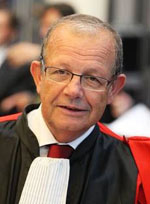 In an announcement made on 14 May 2012, we introduced Professor Alain Pellet as the person who will serve as the Independent Objector.

Professor Pellet's credentials and experience are an ideal fit for this key role. He is a highly regarded professor and practitioner of law and has represented governments as Counsel and Advocate in the International Court of Justice in many significant and well-known cases. He is widely published and holds several significant honors.

More information on Professor Pellet can be found here: http://www.alainpellet.eu

For more information on the Independent Objector, visit his website: http://www.independent-objector-newgtlds.org/