STATEMENT OF THE PROBLEM:

In June 2012 ICANN published close to 2,000 applications for new gTLDs. The processing of these applications consists broadly of two phases: Evaluation followed by Pre-delegation steps, then Delegation.

Given that there is a constraint on scaling the Root Zone at a rate not exceeding 1,000 new gTLDs per year, an ordering of these applications is required either at the Evaluation phase (called Batching) or at the Pre-delegation phase (called Metering).

An attempt to use the digital archery technique for Batching was ruled out at the ICANN meeting in Prague after consultation with the ICANN community. As published recently, ICANN's current plan (which might be amended by results of public comment) is to undertake the Evaluation of all the new gTLD applications in a "single batch". This process can be completed in 11-12 months, possibly less – resulting in the simultaneous publication of all initial results of the Evaluation phase in June-July 2013.

The initial results are likely to create some form of natural filtering of applications into the Delegation phase, nevertheless ICANN must plan for the possibility that Metering will still be needed.

Proposed solutions for Metering are being considered in coordination with the ICANN community. Solutions will take some time to implement, and the timeline is ultimately dependent on developmental work as well as the consultation process.

Examples of Metering techniques include:

ICANN's objective is to provide certainty to applicants and a solution for Metering should be developed as efficiently as possible.

However at this stage it is only possible to provide a tentative roadmap for the processing of new gTLD applications. If community support emerges for a single Metering solution, the Board might be able to approve an approach after a single round of public comment. Otherwise, an additional round of community consultation might be necessary to develop community consensus.

Development of a Metering solution (tentative):

[numbers in bracket represent the ID numbers on the schedule below]

Important notes about the tentative roadmap:

A graphic representation of the tentative roadmap is furnished below. 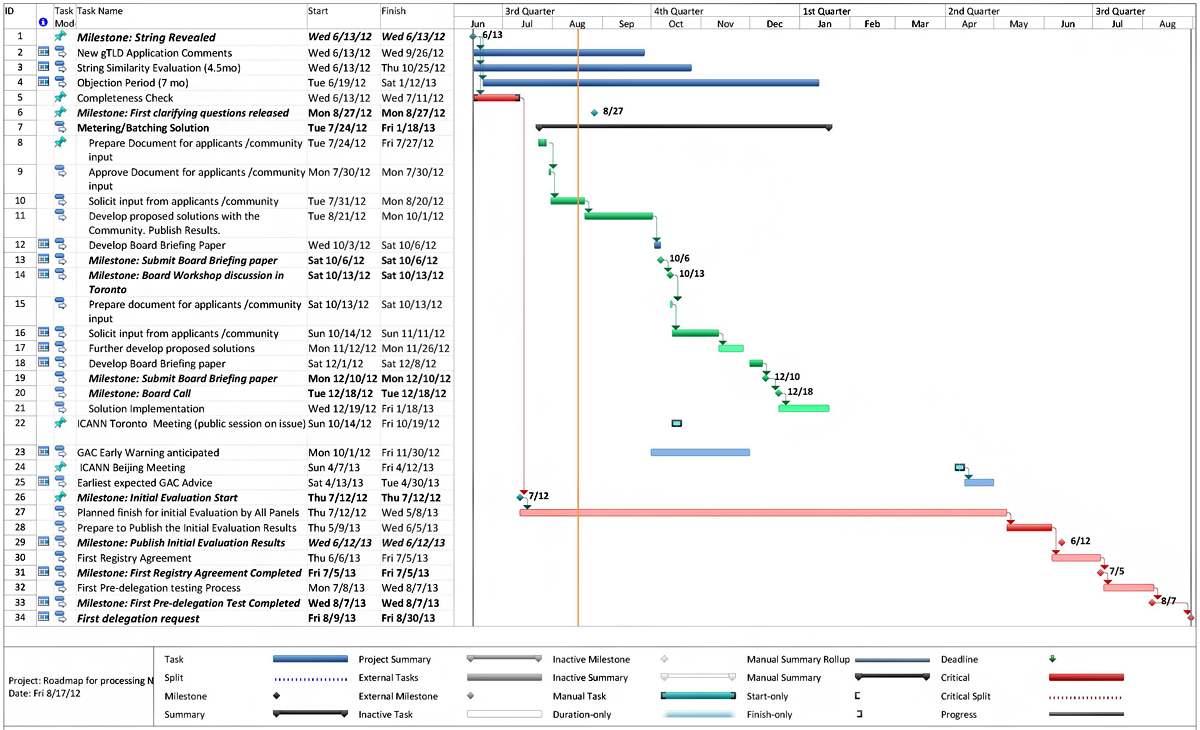